The Glickenhaus 004S is not a name that stirs childhood fantasies. At least not yet. This three-seat, carbon-fiber exotic sports car is the street legal variant of the Glickenhaus 004C GT3 spec racecar; a vehicle proven in the grueling 24 Hours of Nürburgring. The 004S is the rare car that will elevate your heart rate before you even start the engine. And once you’ve experienced it, it will haunt your dreams. 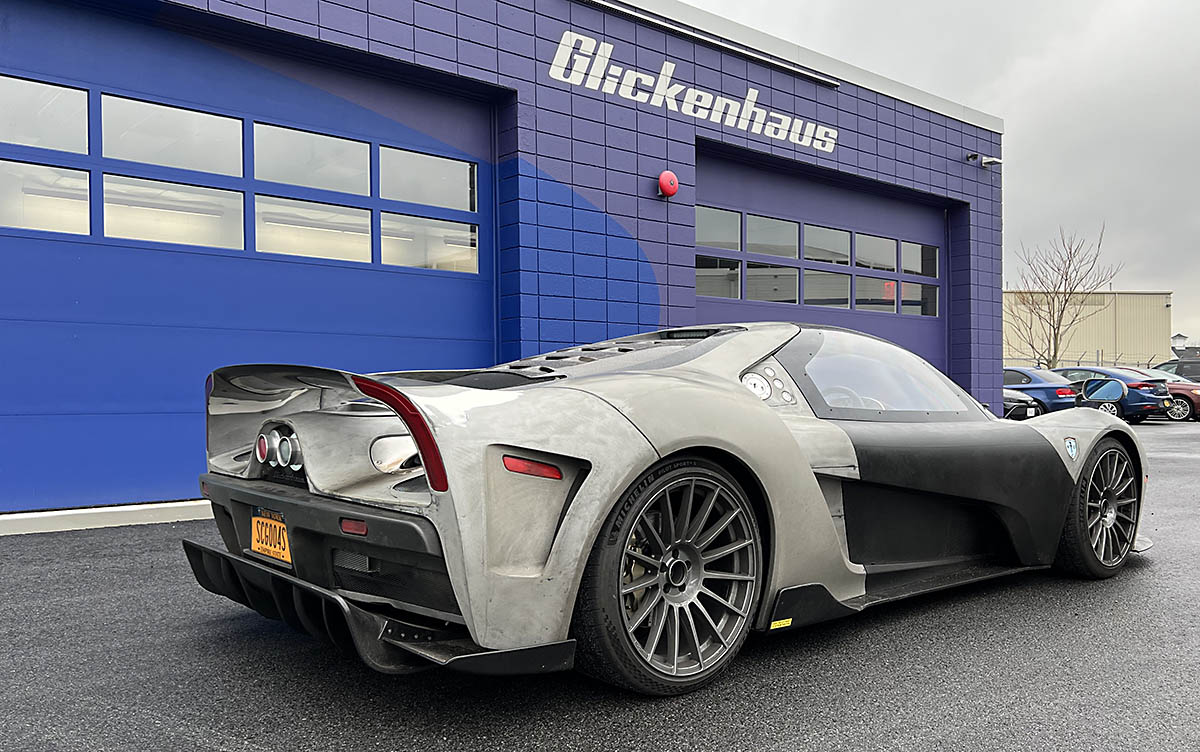 Rear view of the 004S showing the integrated rear spoiler and diffuser.

Like the Glickenhaus Boot off-road SUV, Jim Glickenhaus and his son Jesse are building vehicles that don’t follow the standard blueprint used by other auto manufacturers. For Scuderia Cameron Glickenhaus, there are no rules. Each of the SCG production vehicles have been inspired by the vintage competition vehicles in Jim’s stellar collection. Take a look at Jim’s Ford MKlV J6, Lola T-70, and Ferrari 412 and P3/4 and the Dino Competizione and you’ll see the connection to the 004S.

A few of the cars in Jim’s personal collection. And yes, he drives them all.

Walking up to the car, the elevated front wing, bubble canopy and flying rear buttresses offer so much drama and promise you feel the performance potential before you even experience it. Even this raw test mule with its unfinished body panels looks exotic and seriously fast. Climbing in takes a little extra effort due the center seating position but the gullwing doors offer a large opening for entry. Once seated, the massive rounded windscreen, glass roof and driving position afford maximum outward visibility and a sense of space I’ve never previously experienced in a closed roof road car. With Jim climbing in behind me in one of the two staggered passenger seats, and my foot on the clutch, I pushed the starter.

Before even getting underway, I find one thing remarkable. Jim is about a foot taller than me, and yet we both fit in the car as if it were tailored for each of us, with the steering wheel and shifter falling perfectly to hand. Yes, shifter. Unlike most supercar manufacturers these days, the 004S can be had with a six-speed manual, its lever sprouting out of a proper metal gate. 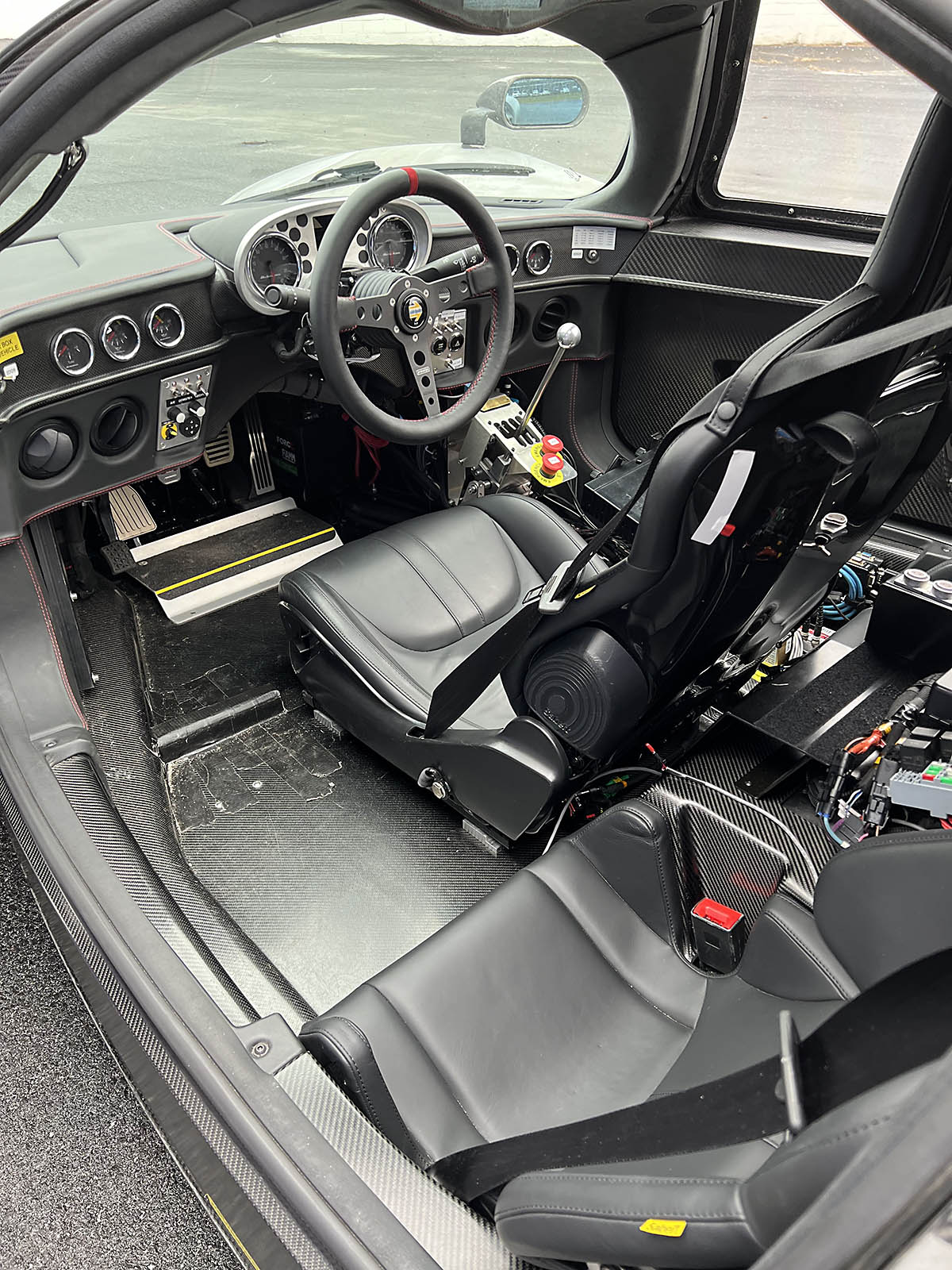 The trusty mid-mounted 650 hp supercharged GM LT4 engine starts easily. I ease off the clutch and we roll off with no drama. Considering this mule has about 50,000 hard test miles on it, both on the pockmarked roads of New England, and pushed to the limit on Monticello Motor Club’s 3.6 mile road circuit, I was expecting a very raw and rattly machine. On the contrary. The carbon chassis and all of the components are solid as a rock. Everything feels properly put together. The noise level is definitely on the higher side, but that will be lessened significantly with the production car’s carpeting and sound insulation. 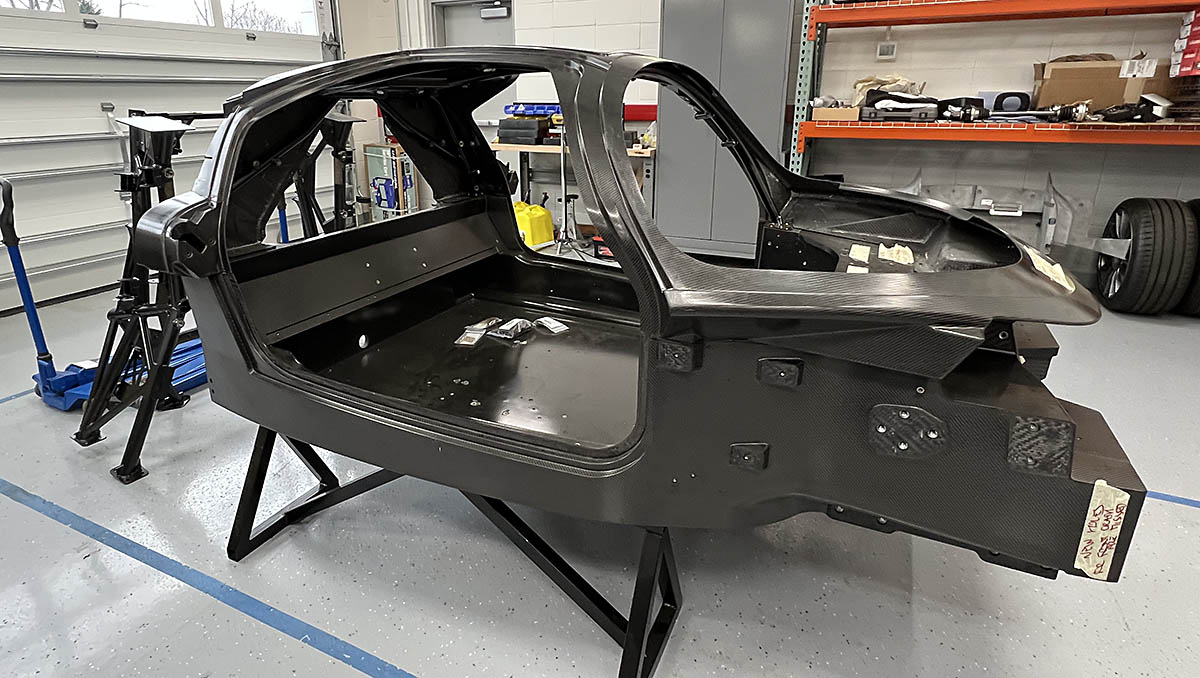 The 004S carbon tub with integrated roll cage is lightweight and incredibly strong for optimum occupant safety. The 004S has already been crash tested in preparation for certification and production.

Acceleration is immediate as you would expect considering the car’s 2,600 pound curb weight and the LT4’s ample torque. The ride is firm, as the mule’s Bilstein adjustable suspension is set to its stiffest setting. But even then, it’s not uncomfortable or unsettling. On the highway passing an SUV, you appreciate how low the 004S is. It feels every bit a race car, yet still civilized. The horizontal side mirrors are mounted on the tops of the fenders instead of at the base of the a-pillars so you view them out of the giant windscreen. Those mirrors and the center seat allow you to have total awareness of your surroundings without having to move your head. Brilliant. 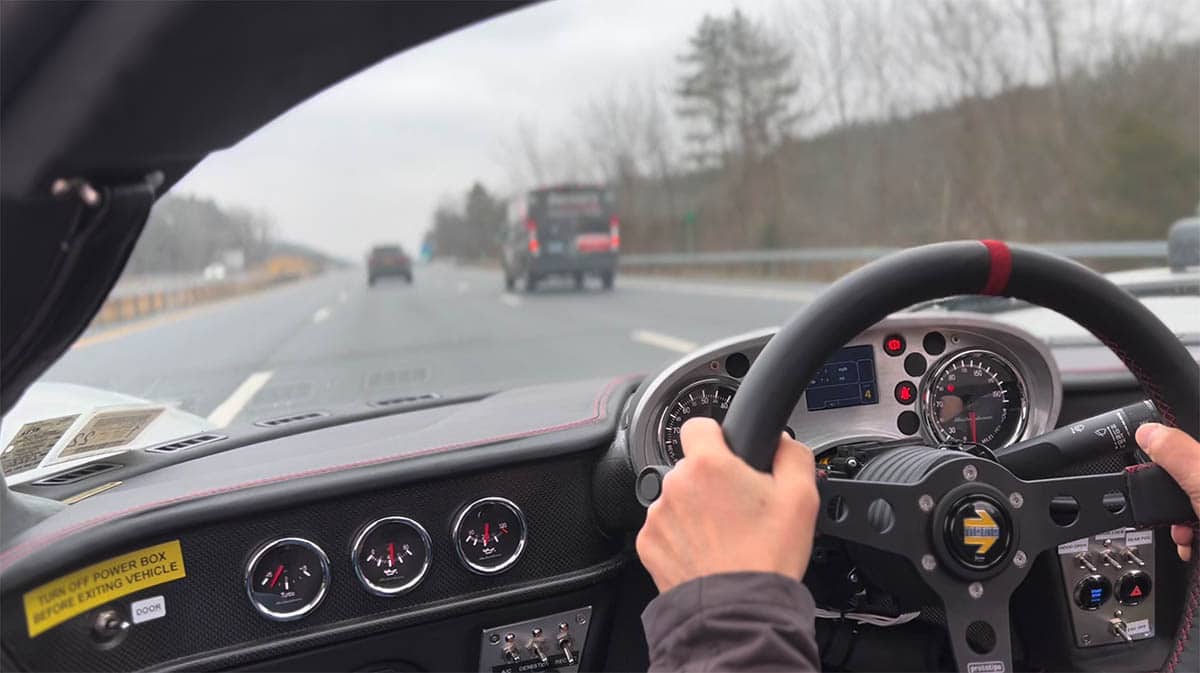 The best seat in the house? All three!

Let’s talk about that center seat. Having never driven a McLaren F1, this was my first time driving a road car from that position. And now I can’t understand why more manufacturers haven’t pursued it. First off, it’s far superior for the driver, aside from entry and exit taking requiring a few extra moments. The center position aids in car control as you get the truest sense of what each corner is doing. The unobstructed forward aids visibility for  both spirited driving and low speed maneuvering. The 004S has a full analog gauge package as you would expect, but with the wheel in the center, the gauges are able to be positioned on both sides of the dash instead of crammed together. Speaking of gauges, the Glickenhaus trademark external side gauge cluster continues on the 004S and is a very cool design element. The center seat configuration also allowed for not one but two passenger seats. Having room for two companions opens up so many more possibilities. The 004S could even qualify as a starter family car.

After some highway miles, we jumped off an exit so I could get a feel for the car on some of our local twisty two lanes. The handling, steering feel and shifter are as good as any car I’ve driven. But the commanding view of the road and your surroundings raises the bar significantly. The LT4’s supercharger whine is loud enough to be involving, but not enough to smother conversation. The other benefit of the center seat is a lack of distractions. Your passengers could be fiddling with their phones and you would be none the wiser. But with such a great view ahead, why would they need any other entertainment? This is a car built around the driver, but with serious consideration for the passengers as well. Their seats are comfortable and the legroom is extraordinary.

I’ve known Jim for more than a decade and was with him at his first entry in the Nürburgring 24 back in 2011. Watching his vision and master plan coming together has been fascinating. From his custom bodied Ferrari-based P4/5 one-off that made him a global automotive celebrity to the dozens of employees, multiple facilities and series street car production of today is quite an accomplishment. He dreams big, but unlike most people, he actually fulfills those dreams. 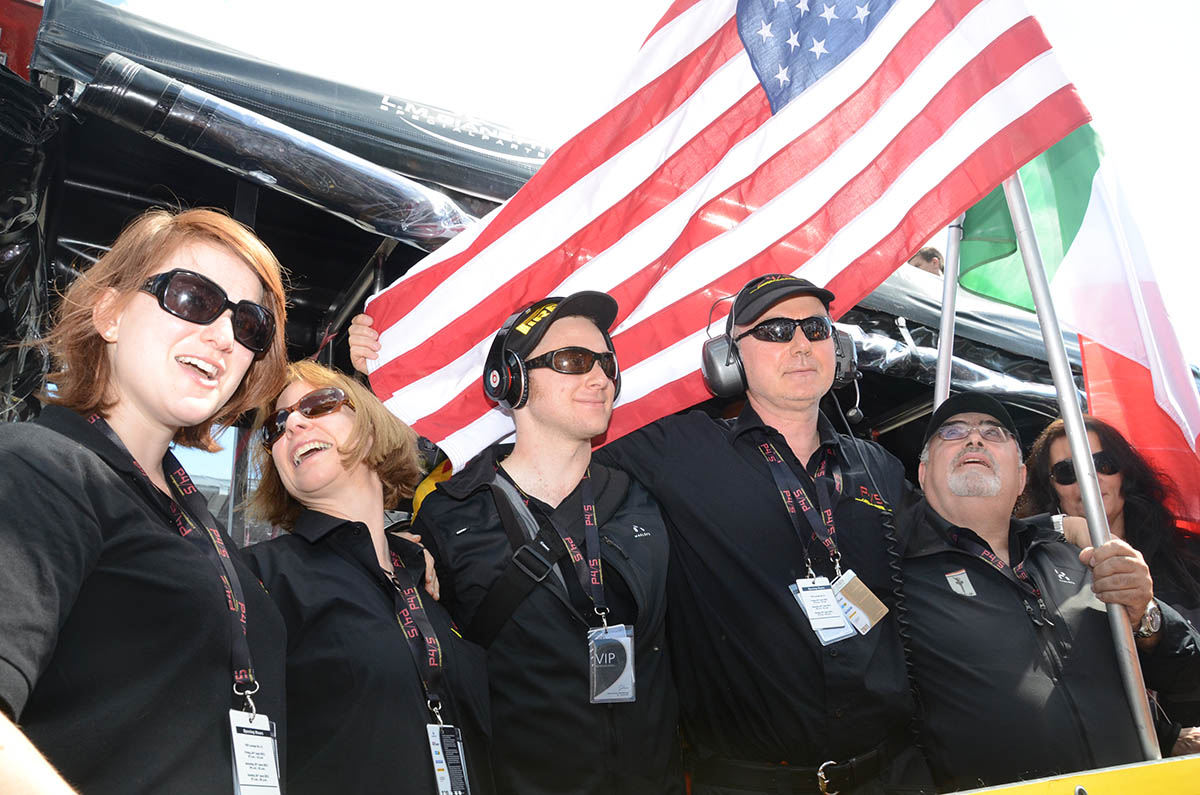 The Glickenhaus family (and Sal) at the finish of their first 24 Hours of Nürburgring in 2011.

For me, modern supercars don’t get me excited. While I appreciate the performance, most leave me wanting a bit more soul. But with the design of the 004S, and based upon my brief drive in the mule, I seriously can’t wait to sample the production version.